LMU and SNSB researchers have identified coral-eating crown-of-thorns seastars in the Red Sea as distinct species that occurs only in this location.

Tropical coral reefs are among the most endangered ecosystems on Earth. In addition to climate change, coral-eating crown-of-thorns seastars (Acanthaster spp.) pose one of the biggest threats in parts of the Indo-Pacific region. Up to 40 cm in length, these creatures feed mainly on the polyps of fast-growing stony corals. Mass outbreaks are not uncommon, whereby the seastars propagate at a rapid rate and many thousands of individuals can destroy large areas of coral reef. Such mass outbreaks have become increasingly frequent over recent decades, partly because the natural enemies of the seastars have been decimated by overfishing. 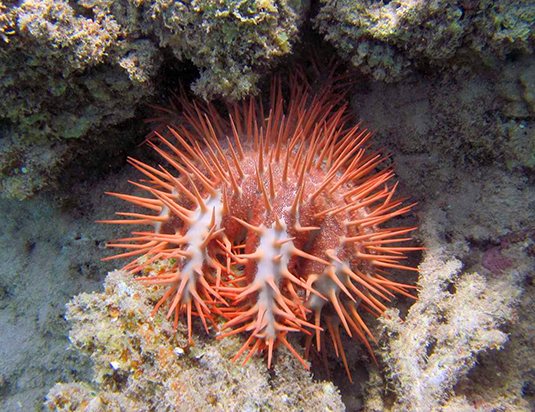 Crown-of-thorns seastars are widely distributed throughout the Indo-Pacific region. They get their name from the large venomous spines that protrude from their arms. Based on regional morphological differences, various species had been described in the past. However, the relationships between them remained somewhat hazy. “It was long assumed that the first species in the genus described, Acanthaster planci, was distributed from the Red Sea and the Indian Ocean over the entire Pacific,” says Gert Wörheide, Professor of Paleontology and Geobiology at LMU. However, DNA barcoding data from a doctoral thesis supervised by Wörheide showed more than 10 years ago that A. planci can be subdivided into four strongly diverging genetic lineages, which presumably represent different species. A team led by Wörheide and Gerhard Haszprunar, Professor of Systematic Zoology at LMU, has now demonstrated with the aid of morphological investigations and genetic analyses that the crown-of-thorns seastar native to the Red Sea form a distinct species, which has been given the name Acanthaster benziei. “This underlines once again the importance of the Red Sea as an ecosystem with unique fauna and numerous endemic species,” emphasizes Wörheide. The new species name honors John Benzie, Professor at University College Cork, who has done pioneering work with his groundbreaking genetic studies on crown-of-thorns seastars in the 1990s and his comprehensive collection.

With A. benziei, the scientists managed to describe a new species of crown-of-thorns seastar for the first time in several decades. “Although isolated particular features had already been observed in crown-of-thorns seastars from the Red Sea, such as a tendency to a more nocturnal lifestyle and probable lower toxicity of the spines, we didn’t know yet that it was actually a distinct species,” says Wörheide. The research confirmed clear differences between A. benziei and the other species of the “A. planci” species complex. In addition to characteristic sequences in the mitochondrial DNA, this included morphological features such as a lower number of arms and thinner, differently shaped spines. 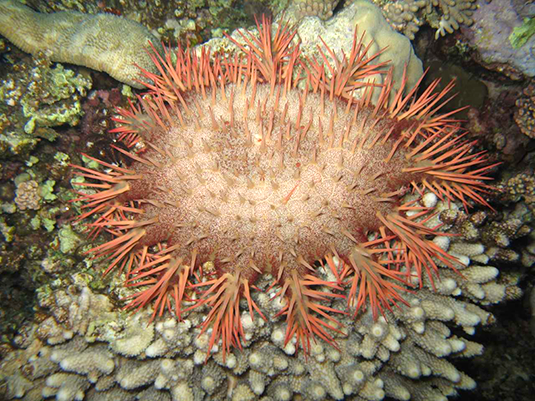 “Now that we know it’s a distinct species, we can direct our attention to the biology, ecology, and toxicology of A. benziei and the other Acanthaster species,” says Wörheide. In the past, scientists had also observed a lower tendency for mass outbreaks in Red Sea crown-of-thorns seastars. “Such outbreaks are known primarily from Acanthaster cf. solaris in the western Pacific and regularly cause major damage to the Great Barrier Reef, whereas the phenomenon appears to be less severe in the Red Sea – whether species-specific characteristics are a contributing factor could be the object of future investigations,” says Wörheide. Most data that have been gathered to date on the biology and ecology of crown-of-thorns seastars comes from Acanthaster cf. solaris from the western Pacific. “By clearly distinguishing the various species of coral-eating crown-of-thorns seastars, we can carry out more detailed research into the dynamics of mass outbreaks, one of the multiple stressors that affect tropical reefs. Ultimately, this is a step in the direction of better management of reef ecosystems.”