Zoologists at LMU report the discovery of a trove of fossil fly larvae, and an intriguing caterpillar, encapsulated in samples of amber that are tens of millions of years old.

Although amber looks like a somewhat unusual inorganic mineral, it is actually derived from an organic source – tree resins. Millions of years ago, when this aromatic and sticky substance was slowly oozing from coniferous trees, insects and other biological material could become trapped in it. That is why some samples of amber contain fossilized specimens, preserved in a virtually pristine state, which afford fascinating snapshots of the flora and fauna of long-gone forests. Now, a research team led by LMU zoologists Viktor Baranov and Joachim Haug has made exciting finds in samples of amber from the Baltic region and Myanmar, which provide new insights into the ecology of two groups of ancient insects. 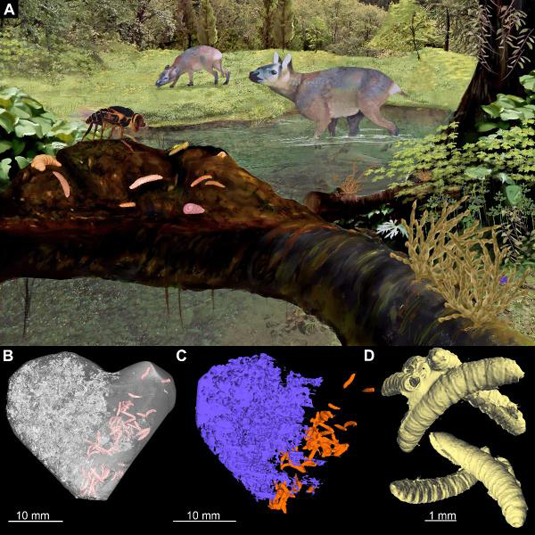 The disocvery of fly larvae on a piece of dung suggests the existence of at least medium-sized herbivores.
Illustration: Natalia Jagielska

In the Eocene period – between 56 and 33.9 million years ago – the Baltic amber forests covered (most likely around 38 million years ago) large areas of what is now Northern Europe, and were the source of most amber found in Europe. In one sample, the LMU team identified no less than 56 fly larvae, all of which were entombed while feasting on a single chunk of mammalian dung. “This fossil is particularly interesting, because the dung is full of plant residues, which implies the presence of at least moderately large herbivores in these forests,” Baranov explains. On this basis, he and his colleagues assume that there must have been open areas of grassland nearby, corroborating earlier hypotheses. “The Baltic amber forest is often portrayed as a densely overgrown and humid jungle landscape. But it is much more likely that it was a more open, warm-to-temperate habitat,” Baranov says.

In other samples, the researchers found insect larvae whose modern descendants are mainly found in association with plants that are under chronic stress. “It has long been suspected that forests which produced large amounts of amber were ecologically under stress,” says Haug. “That would be perfectly compatible with the presence of these larvae.” High temperature and dry conditions are the most probable source of such stress. 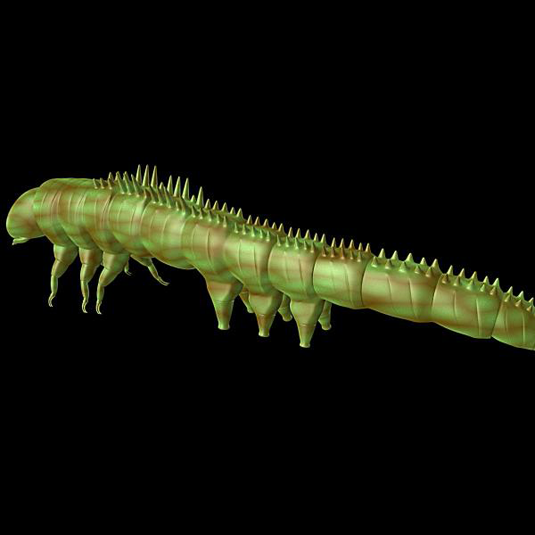 The unusual butterfly larva that Haug identified in amber from Myanmar is considerably older than the specimens from the Baltic. It dates to the Cretaceous, more than 100 million years ago, at a time when dinosaurs still dominated the Earth. Up until now, only four caterpillars from the Cretaceous had been discovered, and the new find is very different from all of them. “All of the previously discovered caterpillars were relatively naked“, says Haug. “Our caterpillar is the first ‘armored’ specimen that has turned up – it bears spines dorsally on some of its segments.” The new specimen thus supports the idea that butterflies underwent an early phase of diversification and also reveals some aspects of their ecology. In modern caterpillars, such spines serve as a deterrent to predators – more particularly, songbirds. “The rapid diversification of birds first sets in after the demise of the large dinosaurs, but small birds that may have fed on caterpillars were already extant during the Cretaceous,” Haug points out.